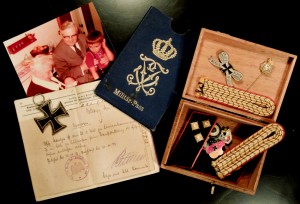 „Die Narbe“ or „The Scar“ is a project of Berlin based photographer Martin U. K. Lengemann. Born out of the idea to travel along the former western front of the Great War 100 years after its outbreak, Lengemann tells the personal story of his great-grandfather and the war in general. The story was first published in Germany’s sunday newspaper the WELT AM SONNTAG in June of 2014.

Lengemann’s main objective is that of reconciliation. For over two decades the rapprochement between Germany and Great Britain has been a central cause not only of his work but also of his personal life. Having studied the Great War in detail for many years, Lengemann’s knowledge of history and his love for classical music, build the foundation for this project. „The Scar“ is a multifaceted piece of story-telling, that until 2018 will continuously be extended.

In spite of the fact that my father and I were both born in the city of Kassel – he in 1938 and myself in 1964 – we each were born in two completely different cities. Between our birthdates lies the destruction of the old city of Kassel and the rebuilding of an entirely new city in the 1950s.

On the evening of October 22, 1943, Kassel was destroyed by the airstrikes of the Royal Air Force. What was once considered one of the nicest cities of Europe was almost entirely destroyed by area bombings. 97 percent of all buildings in the inner city circle were pulverized. This night of October 22 shaped the perception of Great Britain of many people that I grew up with, including my own family.

It goes without saying though, that we Germans shouldn’t be pointing fingers at anyone. The one and only reason for the bombing attacks, was the fact that the German Luftwaffe had been attacking British cities since 1939. These included the cities of London, Portsmouth, Southampton, Plymouth, Exeter, Bristol, Bath, Cardiff, Birmingham, Coventry, Nottingham, Norwich, Ipswich, Sheffield, Manchester, Liverpool, Hull, Middlesbrough, Sunderland, Newcastle, Glasgow and Belfast. In the month of May 1941 alone, 375.000 Londoners were bombed out and lost their homes due to German airstrikes. World War II and especially the Holocaust defy comparison and are mind-boggling examples of what humans are capable of doing to each other. Yet without World War I there would have been no World War II. Millions died as a result of the Great War, and European nations sacrified their youth and thus their future.

My project ‚Die Narbe‘ or ‚The Scar‘ is about the victims of the Great War on all sides. It also tells the story of how one family, i.e. my family, came to love the former enemy.

On the evening of October 22, 1943, my father was holding his mother’s hand, as they were standing on top of a hill in Freyburg Unstrut, to where they had fled to escape the bombings. The fire in Kassel caused by the bombings lasted for seven days and the light shine was visible from 200 km away. The fires eventually died down, the memories of this night didn’t.

After the war my father was one of the first of his generation to go abroad to the United States as an exchange student. It was the welcoming nature of the family he stayed with, and the openheartedness and kindness of the people in general there, that made it easy for him to overcome hatred and prejudice and make friends with the former enemy. Personaly, I don’t know many Germans that are as anglophile as my father is today.

Reconciliation without the exchange between former enemies is not possible. It is the knowledge of the respective other, the mutual understanding of customs, fears and the knowledge of what they went through and what they lost, that makes forgiving possible. My great-grandfather realized this in the the middle of a battle during World War I, when he and a British soldier met between the trenches and smoked cigarettes together only to be shooting at each other again the next day. It’s his story and a little wooden box that started the project Die Narbe or The Scar.

A lot has happened since the two World Wars. 100 years after the beginnings of World War I, reconciliation still is and remains the only way to overcome the past and make peace possible and it is by no means a given.

In the summer of last year Germanys biggest sunday newspaper, the ‚Welt am Sonntag‘ published my story of my great-grandfather and my experiences of a one week trip along the former west front, 100 years after the war took place. Since then the project Die Narbe ( the Scar ) has taken on a whole new dimension. All the content, i.e. the photos and videos I took, the text and maps and a lot more, is freely accesible online so that school classes for example can use it in their history lessons. Most of the content on the website www.http://die-narbe.net/ is available in German and English.

The other big part of the project is of a musical nature. The original article tells the story of George Butterworth. Also just recently the Horenstein Ensemble, one of Germany’s best known chamber ensembles, together with the sopranist Barabara Krieger, has released a CD with the title „Verlorene Generation/Lost Generation“. They are playing the music of three composers who died in the Great War between 1914 and 1918: Rudi Stephan, George Butterworth und Cecil Coles. In the future concerts will take place all over Europe.

It is my plan to develop the project further until the 100 year anniversary of the end of the war in November 2018. We have plans for a book publication, a photo exhibit and a documentary film. As you can imagine all this is quite a bit of work and I’m currently trying to get support. It would be a great motivation and honor for everyone involved with the project, if we would have your support and appreciation of the project.